I thought I had better do a little preview of the Tour de France. The first one I have missed in a long time.

I have to be honest when I saw this year's Tour de France Route I was excited at all the Sprint Stages. And kinda happy there aren't many mountain top finishes....then I had to change my view from sprinter/leadout to a fan and let you guys know how this race will primarily go.

Barring accidents and illness, which are impossible to predict, espsecially these GC guys that are notoriously bad at going downhill fast, you will see a large peloton arriving into Paris this year. Don't get me wrong, gonna be bloody hard and fast racing...add the stress and heat and uncompromising riders. It's going to be hard race. But the lack of shorter mountain top finishes typically makes getting inside time cut a little easier. There are always the days that on the bus you think OK...today is routine and there should be no problems...and then there is a break of 25 up the road that just won't come back no matter how hard the peloton chases. End result...the tip of the saddle firming implanted up your backside for 5 hours and 10 guys missed Timecut. I'm guessing stage 9 this year.

In my opinion, I think Ritchie Porte will win this year's Tour de France. This year's race suits a strong Time Trial rider that can climb. Aka Ritchie. With the lack of major mountain tops, I am sure he can stay in touch with the leaders. Stage 12 will test him and Stage 18 the only HC Mountain Top finish. However in saying this his form all year has been a step above Froome, and I think he will take the top step from Froome and then it's a mixed bag for the final spot on the podium in Paris.

There is a small chance that with all the sprint stages we could see a genuine sprinter win the Green...but...unlikely. Go ahead and give this to Sagan, his 6th?

Let's go Thomas de Gent. We love him. I roomed all last year with him in the Tour. And he will find the correct breaks to score the points. This is actually a decision I have made on heart not from studying the parcour.

Leadout Trains and the Sprinters

A big question mark over Cavendish, his training and his form. Sick most of the season but don’t ever count out the Manx Missile. When he can see that finish line with clean air not many people come past him. He is so good that he doesn’t need a full train. He will have support but will do most of the last kilometre on instinct. Renshaw is super relaxed and cool under pressure so will guide perfectly. Just a small question mark over his injury comeback. I don't think he will be fit enough to finish the tour. He doesn't have a great GT track record that's for sure.

Incredible rider. Massive top line speed and has the help in the finals to be at the front with 200m to go. He has trained perfectly and used a good altitude block to enable him to comfortably make it over the climbs. If he gets the front at 200 to go....good luck coming past him unless you have 2000w.

Speaking of 2000w...there is one guy I know that has this grunt. My brother from another mother...Andre Greipel. He is in great shape make no mistake. He is super hungry to win again at the Tour. He always rises to the big occasions.

Jurgen Roelandts will guide him perfectly in the finals, and then we just need the gorilla to get some clean air and not be pinned on the fence looking for an open space.

I can't see, other than Kittle, a team that can take over the race with 5km's to go and then unleash their sprinter. This makes for very nervous sprinting and positioning until around 2km to go as this is about how far the leadout can start with limited numbers. Once the leadout begins...it's the safest part of the sprint as typically nobody can move many positions.

In all honesty, I have to remove my participant hat...I believe you won't see the dominance of one or two sprinters winning everything. It's gonna be a different winner most days. And to be honest..this is the most fun to watch. There are so many super fast guys taking the start line so don’t be surprised with different winners.

We will have a podium from a Kiwi rider in a Stage and a top 10 result in the general classification as long as there is no accidents or sickness. So nice to see four Kiwis lining up. I'm pretty sure that is some kind of a record. Will be a big eye opener for the new guys but it's an awesome experience. Wish them the very best. 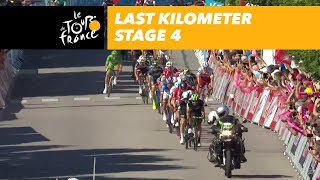